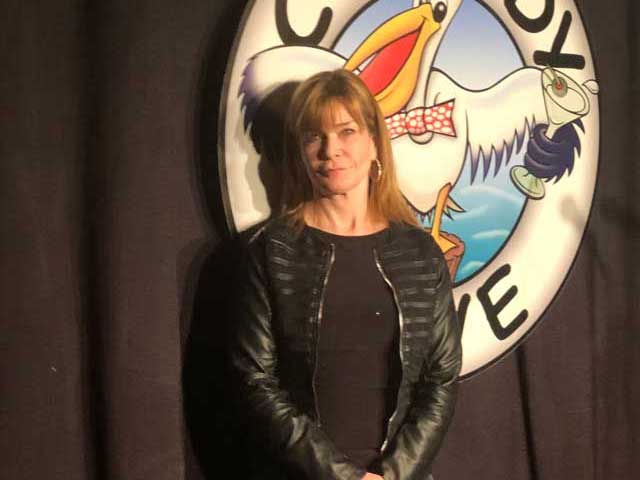 Vanessa is the quintessential native New Yorker. She only just got her drivers license a couple you years ago. She spent a year at Millbrook Mansion with her father who introduced Timothy Leary, and later, Paul McCartney of the Beatles to LSD. After an accidental “trip” of her own at 5 years old, she returned to the care of her mother who was trying to juggle the full time career of finding good grass in bad neighborhoods with her responsibilities as a mom. Throw in two years on a commune by herself, two years in London with her dad, a decade of temp work and her angst was complete. Coincidentally, a comedian was born.Vanessa just did The World Comedy Tour in Australia in 2005 as well as, Comedy Central Presents which first aired February 2005. She was recently featured on Tough Crowd with Colin Quinn, Dateline, and Oxygen as well as doing the Montreal “Just for Laughs” tour with Kevin Pollack. She has done The Montreal Comedy Festival 5 Times in total, as well as appearing on the original pilot of the AJ Benza Show on “E”. She’s a favorite of Comedy Central and did “Canned Ham”, where she did a spoof parody of the movie, “Nurse Betty” as well as an appearance on “New Joke City”. She was the guest host on NBC’s “Later” as well as the critically acclaimed film “Ghost Dog”, directed by Jim Jarmusch. She also taped two TV Shows, at Jonglar’s in London, and well as a TV Show in Rotterdam, Netherlands. She has performed on the “The Jim Bruer Show”, Comedy Central’s Premium Blend and NBC’s “Louie Anderson Comedy Showcase.” In 1999 Vanessa was invited to perform her one woman show “Flashback” at the Aspen US Comedy Arts Festival. She was then offered the opportunity to do “Flashback” at the HBO workspace in LA and at Gary Marshall’s Falcon Theatre. She has completed her first screen play, which is now in development. Vanessa toured approximately 30 military bases in the Middle East for a month. She’s a national headliner, can be seen all over the United States as well as Europe. But, she can always be seen a little closer to home at the Comic Strip, Stand Up New York, Caroline’s, The Boston Comedy Club, Gotham Comedy Club, The Improv, The Laugh Factory, and the Comedy Cellar in New York City.