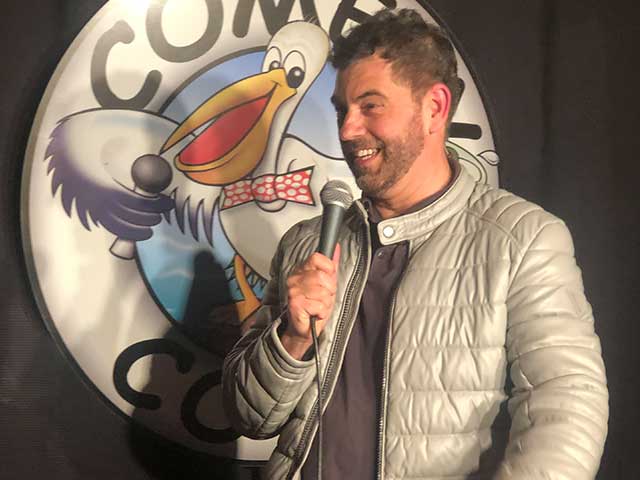 George Gallo is one of those performers that keeps his audiences riveted because they dont want to miss a thing. Whether he is performing on stage, or directing / producing / acting in a video short, he is an entertainer to the very core. George began performing as early as the fourth grade, and says by the seventh grade even his teachers took notice. One teacher even went so far as to take George around where he impersonated all of the teachers in the school  and kept them all laughing while he did it. He was in fact voted Most Humorous by his high school class, but it was his talent for mimicry that has evolved into an uncanny ability to reproduce an exact sound, voice, or character.

A child of the seventies and admitted science fiction freak, his influences include Cheech and Chong, Robins Williams, Eddie Murphy and Steven Spielberg movies. His involvement as an extreme BMX bicyclist gave him the physical confidence to work in a high degree of physicality into his performances, and he soon began acting in, producing, and directing short segments for radio. These bits led to video segments that have since been featured on NBC, Make Me Laff, FOX, and Comedy Central, to name a few. Word of his talent for writing led to several segment writer gigs, as well as featured comic spots at some of NYs most well-known comedy venues.

Gallo doesnt stop there. He says he likes to have a lot going on at once; whether its simple joke telling, chatting up the audience, or demonstrating his latest cast of characters (ask him about Henry, his newest character, or the post-plastic surgery woman face), Gallo delivers it all with an almost alarming level of energy.

A few of his standard bits that you dont want to miss include the backwards record because it not only showcases his sound effect talent, but its so funny that its hard to tell which is more impressive the sound replication or the humor. With more than 40 video shorts to his credit including the most recent Downtown Taxi in NYC and Annoying Cell Phone Guy (www.georgegallo.com) George plays with the human condition like dangling yarn in front of a cat. A native Long Islander, he has been performing across the tri-state area for more than 15 years. His stints on 92.3 K-Rock, Carolines Comedy Hour, Short Attention Span Theatre, Evening at the Improv and as a segment writer make him one of the most diverse and sought-after entertainers in the industry.

George is very selective about his content and language, and feels responsible to create comedy that is funny without being offensive. (Unless the offensive thing is really really funny)