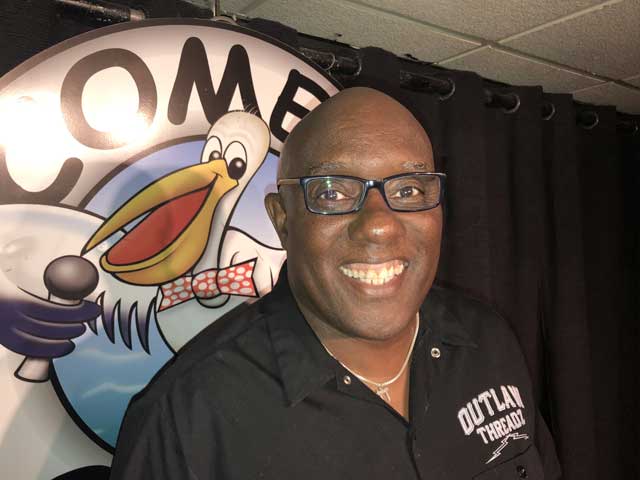 February 1979. While attending Mercy college in Dobbs Ferry, N.Y. Eddie was approached by members of the student government organization and asked to m.c. a talent show to be held at the school. All of the contestants were singers and Eddies job would be introducing the performers and entertaining the audience with comedy while the judges decided the winner of the talent show. After the last performer left the stage and the judges started to leave, Eddie asked the judges to return to there seats because, there was still one last contestant. Eddie then went on a 12-minute comedy rampage that ended with him winning 3rd place. It was then that Eddie knew what he wanted to do with his life.

In November of 1979 Eddie Clark and a friend walked into the Original Improvisation Comedy Club in New York City to audition for a regular spot at the club. Eddie got a chance to show the owner what he could do and despite his lack of experience, he thrilled everyone in the club that night. Everyone  except the owner. The clubs policy was that if the owner liked you she would talk to you. If she didnt, the performer was to just walk by her without saying a word. As Eddie left the stage the owner looked away. Eddie walked outside with his friend and then suddenly turned around walked back into the club and whispered in the startled owners ear,  Thanks for the opportunity to show the PEOPLE what I can do. He has lived by that motto ever since. Eddie then left the club and never looked back. The New York Improv closed a few years later but Eddie is still going strong.

Old enough to remember the sixties yet young enough to enjoy the new millennium, Eddie Clark is still one of the hardest working comics on the circuit today. Eddie was born in Jamaica QUEENS, NY and raised in the city of Mount Vernon, NY, where he developed his ability to induce laughter from total strangers. Eddies humor is a blend of personal experiences and everyday life. Eddies stand up has made him a favorite on morning radio shows around the country and has opened opportunities for him to help raise money and awareness for the Susan G. Komen Foundation for the Cure. Eddie appeared on Law & Order S.V.U. , the films Blood Night ( Currently available on DVD )Camp ( I.F.C.), Salted Nuts (featured at the 2006 Sundance Film Festival )   ,  The Flying Scissors. , and the Law & Order made for TV movie Exiled as well as several commercials & promos including, TV Land Prime Movies, The Washington Post, OPTIMUM ONLINE, Major League Baseball, New York Presbyterian Hospital, Comcast Cable, Monster.Com, Nick jr. , National Geographic Channel, ADVANTA, care one credit, Quicken Loans, A&E Cold Case Files, Gothic Cabinet Craft, Red Lobster, Cablevision, Fox Sports and WCBS (New York channel 2). In 2003 Eddie appeared nationally on ESPN 2s Cold Pizza and hosted two online shows at the U.S. Tennis Open for the U.S.T.A. and America Online. In 2004 Eddie Appeared on C.M.T. ( Country Music Television). The show (40 Greatest Done Me Wrong Songs) was one of the Top 5 Highest Rated Specials for C.M.T. in 2004! Eddie then went on to do two more specials for the network in 2005.  Eddie just finished working on a new project touting the advantages of natural gas which will be on your TV soon!

Eddie has expanded his comedy to Carnival Cruise Lines!

When describing Eddies style of entertainment one can only come to this conclusion. Its just Eddie being Eddie